'Coronavirus did NOT come from animals in Wuhan market': Landmark study suggests

'Coronavirus did NOT come from animals in Wuhan market': Landmark study suggests it was taken into the area by someone already infected - as Beijing thwarts efforts to establish source of Covid-19
Specialist biologists suggest the virus was taken into the market by a human
The virus was surprisingly 'already pre-adapted to human transmission'
It comes as Beijing thwarts global efforts to establish the source of the virus
Here’s how to help people impacted by Covid-19


[email=?subject=Read this: 'Coronavirus did NOT come from animals in Wuhan market': Landmark study suggests it was taken into the area by someone already infected - as Beijing thwarts efforts to establish source of Covid-19]e-mail [/email]


China’s claims that the pandemic emerged from a wild animal market in Wuhan last December have been challenged by a landmark scientific study.
The Mail on Sunday can reveal that analysis of the coronavirus by specialist biologists suggests that all available data shows it was taken into the market by someone already carrying the disease.
They also say they were ‘surprised’ to find the virus was ‘already pre-adapted to human transmission’, contrasting it to another coronavirus that evolved rapidly as it spread around the planet in a previous epidemic.
The explosive claims come as Beijing thwarts global efforts to establish the source of the virus. The news will fuel concerns over the Communist regime’s cover-up since the disease emerged last year in the central Chinese city.

The new research is clear in its finding. ‘The publicly available genetic data does not point to cross-species transmission of the virus at the market,’ said Alina Chan, a molecular biologist, and Shing Zhan, an evolutionary biologist. Their paper insists all routes for ‘zoonotic’ (animal to human) transmission – in this case from bats – must be examined. It says: ‘The possibility that a non-genetically engineered precursor could have adapted to humans while being studied in a laboratory should be considered.’
The revelations add to the growing clamour for an international inquiry into the outbreak. ‘We need to get to the bottom of many things in relation to Covid-19,’ said Tory MP Bob Seely, a member of the Commons’ Foreign Affairs Select Committee. ‘We need to know where this virus began, why we were told at one time there was no human transmission, and what was the role of the Chinese Communist Party.’
Sourcing the virus is key to understanding the disease, developing vaccines and stopping fresh outbreaks. But the issue has become fraught after US President Donald Trump claimed it emerged from a Wuhan laboratory working on bat-borne diseases and China responding by blaming American soldiers at a sports contest.
Beijing health authorities have insisted the virus almost certainly came from an animal in Huanan market in Wuhan. They said it was ‘only a matter of time’ before they identified the crossover species behind transmission from bats to humans. The World Health Organisation quickly backed its claims. ‘The evidence is highly suggestive that the outbreak is associated with exposures in one seafood market in Wuhan,’ it said in a statement. 
China’s claims that the pandemic emerged from a wild animal market in Wuhan last December have been challenged by the landmark scientific study
Officials closed the market the day after notifying the WHO and sent in teams with strong disinfectants. Samples from animals were taken but, four months later, the results have not been shared with foreign scientists. The actions led to claims that they were deliberately wiping away crucial traces.
‘The crime scene was completely gone,’ said Guan Yi, a University of Hong Kong expert. ‘How can we solve a case without evidence?’
The new study into Sars-CoV-2 –the strain of coronavirus that causes disease – examines genetic samples from patients along with those taken during the 2002-04 epidemic of SARS, a coronavirus transmitted from bats to humans through the handling and eating of civet cats. The paper is by Chan and Ben Deverman, scientists at the Broad Institute, a research unit affiliated to Harvard and Massachusetts Institute of Technology, and Zhan, from the University of British Columbia.
It says they were surprised to discover the new coronavirus has remained so stable rather than adapting rapidly to humans. This resembles the earlier virus, they say, during the later stages of epidemic after it ‘had developed several advantageous adaptations for human transmission.’ This was evident from a sample taken from a patient in Wuhan last December.
They point to ‘multiple branches of evolution in both humans and animals in the 2002-04 epidemic’, adding: ‘In contrast, Sars-CoV-2 appeared without peer in late 2019, suggesting there was a single introduction of the human-adapted form of the virus into the human population.’ 
Alina Chan, a molecular biologist, and Shing Zhan, an evolutionary biologist say 'the publicly available genetic data does not point to cross-species transmission of the virus at the market’. Pictured: A worker inside the P4 laboratory in Wuhan, capital of China's Hubei province
The team says there is no evidence if this means the virus became well-adapted to humans in bats; exists in other animal populations; was spreading undetected in humans for months while mutating; or could have leaked from a laboratory. But they warn the failure to detect any ‘branches of evolution from a less human-adapted’ form of this virus was ‘a major cause for concern’.
Significantly, the study says genetic examination of four samples containing the virus from the seafood market to those taken from the Wuhan patient are ‘99.9 per cent’ identical. This suggests it came from infected visitors or vendors, indicating ‘Sars-CoV-2 had been imported into the market by humans’. The authors confirmed to the MoS they had found no evidence ‘of cross-species transmission’ at the market.
They cite a paper by Chinese scientists, published this month in Zoological Research journal, that has also inferred the virus was brought in to the market after examining samples from infected patients. These new studies dovetail with another work by Chinese scientists published in The Lancet earlier this year, which found only 27 of the first 41 confirmed cases were ‘exposed’ to the market – and only one of four initial cases in the first two weeks of December.
Chan and Zhan said that while the stability of the virus was ‘good news’ for developers of vaccines and treatments, it was alarming not to know the source and any precursors, in case there were pools in the wild from which similar diseases might emerge again. 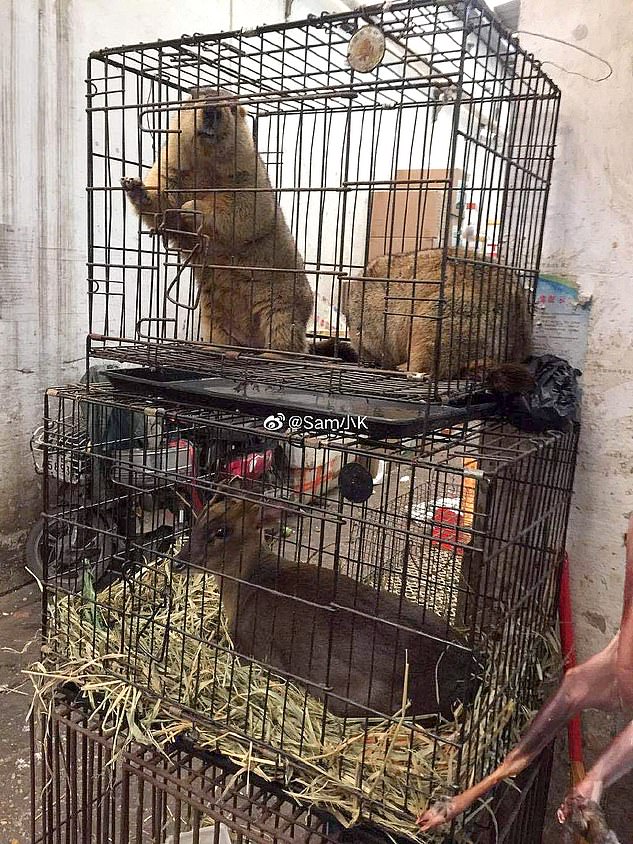 
A beaver and small deer are prepared and sold for food inside South China Seafood Market in Wuhan
‘The evidence suggests a single introduction of the human-adapted form of the virus into humans,’ they said, adding that the strange lack of earlier forms or sibling viruses contrasted with the SARS outbreak. They refused to speculate on how the disease adapted to humans, although they share the scientific consensus there was no ‘human interference’ in its creation.
Their study, which has not been peer reviewed yet, will increase concern over Beijing’s cover-up after it silenced whistleblowing doctors, delayed admitting to human transmission and blocked outside teams of experts from investigating.
Earlier this month, it emerged that a Frenchman was a confirmed case four days before China notified the WHO about a new ‘pneumonia-like’ disease.
China has consistently denied an accidental leak from one of two Wuhan labs working with bats. Last week, however, its officials ordered security at all labs working with viruses to be tightened. The MoS revealed two weeks ago that the head of the bio-safety team at Wuhan Institute of Virology had warned of deficient safety.
China’s Centre for Disease Control and Prevention still says on its website: ‘The virus was successfully isolated from positive environmental specimens, suggesting that the virus originated from wild animals sold in the South China Seafood Market.’

suryahendro
17-05-2020 14:28
Kaskus Addict Posts: 2,635
#7
China’s Centre for Disease Control and Prevention still says on its website: ‘The virus was successfully isolated from positive environmental specimens, suggesting that the virus originated from wild animals sold in the South China Seafood Market.’ 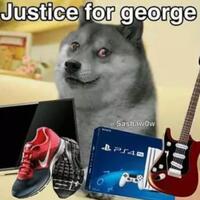 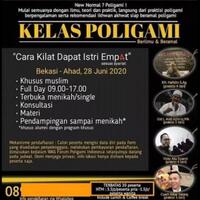 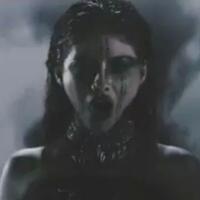 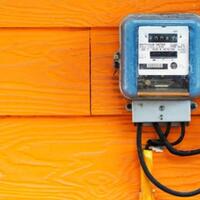 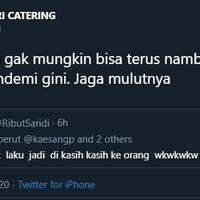