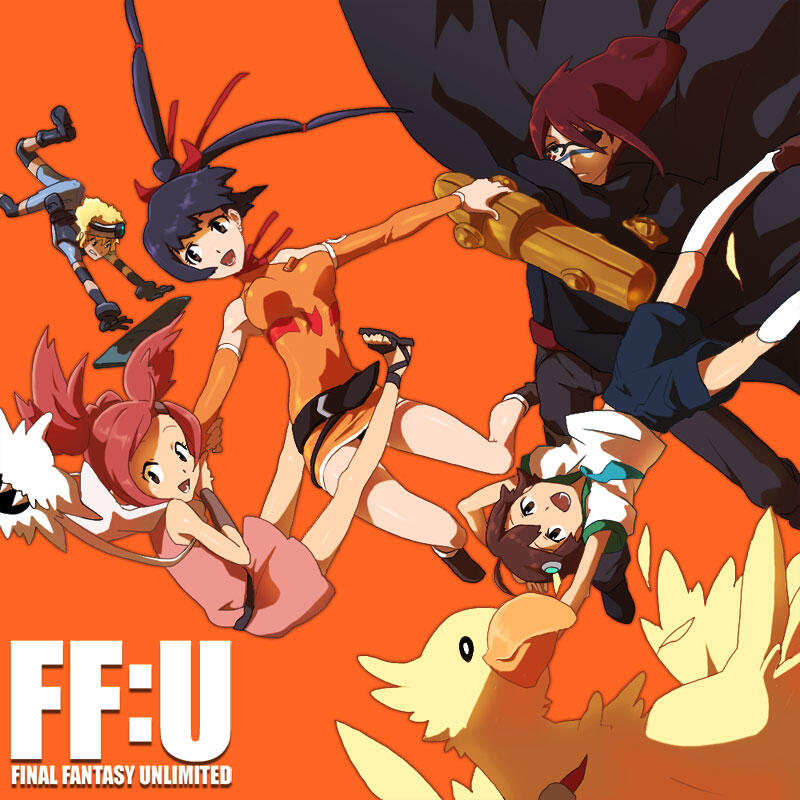 The original Final Fantasy: Unlimited follows the story of Ai and Yu Hayakawa, two twelve year-old twins who travel into Wonderland, a mysterious parallel dimension, in search of their missing parents. Along the way they meet Lisa Pacifist, a member of the C2 Organization, Kaze, a being of incredible power, and a variety of other characters.

The series is divided into two major sections, defined by the main method of transport the protagonists are utilizing. The first half of the series see the group using the Interdimensional Train to reach a new world with each episode. In each of the episodes they would emerge to view a new world, confront the inherent dangers of the world, and stave off the latest assault by either the Gaudium Lords, or Omega.

Meanwhile, the story from the antagonist's view is periodically reveal with Earl Tyrant's discussion with his lords. Earl is the embodiment of Chaos, and is seeking the children as they were spawned of Chaos also, and the pieces of a powerful creature known as Omega. Omega is the ultimate destructive force, with its power only rival by that of the Unlimiteds; immortal beings of immense power. If he is able to collect these and adsorb them into his body, he will be able to rule Wonderland unchallenged.

The second half of the series see the protagonists join up with the rebel faction, the Comodeen, and board the submarine, Jane, which is bound for Telos, the only place in Wonderland that has a natural deposit of the gravity defying flight water. This substance will allow the airship Silvia to fly, allowing them to reach the Earl's flying fortress.

The series climaxes when the Earl himself makes a move on the Comodeen, destroying Jane and capturing the protagonists. Confronted with Chaos himself, Kaze and Makenshi, the only two surviving Unlimiteds, join forces and destroy it, thus ending its reign of terror over Wonderland.

Ai Hayakawa is one of the main characters in Final Fantasy: Unlimited. She is one of a set of twins, with her brother Yu Hayakawa being the other. When they were twelve years old, their parents, the geologists Joe and Marie left their island home of Sadoshima in Japan for their second trip to the Wonderland. Their parents did not return after a long time, which prompted the twins to go look for them.

Of the two twins, she is usually the more practical, often taking charge of the situation, even in the presence of her elders, such as Lisa. She also has a very short temper, as shown when certain things annoy her and she flies into a blind rage over small things, such as Poshepoke's mischief or any other Wonderland creature's peculiar behavior. She is also very untrusting, initially treating Lisa, Kaze, Fungo, Chocoimo and Chocobaba with hostility, though she quickly warms up to people.

Yu Hayakawa is one of the main characters in Final Fantasy: Unlimited. At twelve years of age their parents, the geologists Joe Hayakawa and Marie Hayakawa, left their island home of Sadoshima in Japan for their second trip to Wonderland. He is one of a set of twins, with his sister Ai Hayakawa being the second of the set.

He is the more impulsive of the pair, and the more trusting, as seen in his attempts to befriend Kaze. Early in the series he finds a hair clip with a chocobo feather in it, and by wearing this he can feel the emotions and desires of chocobos he encounters.

His name is written in Roman letters in an episode as "Yuh".

Lisa was born in Russia to Tsar Pacifist and her unnamed mother. She spent the most part of her childhood learning the Kigen Arts from her mother. When she was young, her mother exhausted herself in battle, to the point where she died bedridden shortly after. It is unclear at what age she joined the C2 Organization, but when she was twenty-two, she was assigned to retrieve Joe and Marie Hayakawa, who had disappeared into Wonderland and never returned.

Kaze, usually referred to by Makenshi and their enemies as Black Wind, is one of the main characters of Final Fantasy: Unlimited. He is usually silent and solemn, but can summon tremendous rage during battle. He is the last of his kind, an Unlimited among the Windarians who have all died with their world. Initially he is unresponsive to anybody, sometimes even refusing to answer direct questions, and though he remains as silent throughout the series, he is seen becoming much more protective of those around him, Lisa in particular, though no relation has ever been made explicit between the two.

Kaze is voiced by James Hudson Brownlee in the English dub of the anime, and Nobutoshi Kanna in Japanese.

Makenshi, referred to by Kuroki Kaze as "White Cloud" (Shiroi Kumo), is one of the main characters in Final Fantasy: Unlimited. Makenshi is initially played as a villain working for Earl Tyrant and his Lords.

An Unlimited from the long-destroyed realm of Misteria, Makenshi used the linear motion of his Maken ("Magic Sword") as a channel of the power of Mist to summon his Sword Dragons. Makenshi is voiced by J. Shanon Weaver in the English version and Akira Ishida in the Japanese version.